Markets in 2018 have brought contrast to the prior year. 2017 was a trek “up and to the right” for most financial markets. Except for some drama in the energy sector, most asset classes enjoyed relatively smooth and strong performance. Domestic large cap and small cap equities, international equities, emerging market equities, and even precious metals were all up double digits in 2017. This year, we have seen more dispersion among asset classes and the drama has been more widespread. On the positive side, the S&P 500 is up 2.6% year to date, the Russell 2000 index is up 7.7%, and the tech heavy Nasdaq index is up more than 11% for the year. On the negative side, developed international stocks are down -2.7% year to date and emerging market equities are down -6.7% on the year.

Drilling down further, we have seen several other trends and themes worth noting. High priced stocks (as measured by their price to earnings ratio) have outperformed low priced stocks by a wide margin. Stocks that pay no or low dividends have done much better than stocks that pay high dividends. And growth oriented names have substantially outperformed their value oriented counterparts. All this has taken place against a backdrop of increased volatility since late January.

There are several factors at play here. One we hear about frequently is trade policy uncertainty. Long term investors do not like uncertainty in the markets, particularly when it involves the possibility of an all-out trade war. Big multinational firms have built far-reaching supply chains that help drive down costs and increase efficiency. These global supply chains rely on the free flow of goods and services across borders and around the world. Escalating trade skirmishes threaten to disrupt these supply chains, introducing additional costs, delays, and uncertainty. It’s not good for sales growth, it’s not good for profit margins, and it’s not good for business. Trade policy uncertainty has had a greater impact on emerging markets where global supply chains often originate. All things being equal, greater clarity on trade policy would be supportive of equities in general and emerging market equities in particular.

The future path of inflation and interest rates is another source of uncertainty in markets. In the old days, it was fashionable to think that low unemployment led to tight labor markets and rising wages as companies had to compete for increasingly scarce labor. Rising wages increase costs and cut into profit margins, putting pressure on companies to raise their prices and pass along the added cost to their customers. In recent times it hasn’t worked that way. Unemployment has been as low as 3.8% recently vs. its 50-year average of 6.2% while wage growth has been stubbornly low at 2.8% vs. its 50-year average of 4.1%. The last time unemployment was lower was in 1969 during the Vietnam draft. Unemployment rates and wage growth have never been this low at the same time. What’s more, the Labor Department recently reported there were more job openings than job seekers. At some point we would expect to see upward pressure on wages and inflation. If wage growth breaks out to the upside, it would put pressure on the Fed to raise rates more aggressively to keep inflation in check. That could be a headwind for equities here and abroad. The most recent unemployment report showed more workers entering the labor pool and continued sluggish wage growth, easing concerns for now.

One of the themes contributing to 2017’s smooth and strong performance was the idea, “There Is No Alternative” to equities, or “TINA”. Cash and short-term investments were yielding next to nothing coming into 2017. The Fed was just beginning to raise rates after several years of holding rates near zero. The Fed raised rates three times in 2017 and twice more earlier this year. Expectations are for two more hikes in the remainder of this year. Due to Fed tightening, one-year Treasuries are now yielding more than 2.3%. That’s

higher than the 1.9% dividend yield on the S&P 500 with no credit risk and very little interest rate risk. Many investors are seeing an alternative to equities now that short-term rates are rising. We see evidence of this in Lipper’s weekly fund flow report. Over the past several weeks, money has been flowing out of equity funds and flowing into bond funds. This is a big reversal from recent trends. We too have been very active in helping clients maximize the return on short-term investments. It’s nice to see some yield on cash for a change.

Despite present uncertainties, the outlook for economic growth remains strong. The Atlanta Fed’s GDPNow indicator is suggesting GDP growth slightly above 4% for the second quarter. The Conference Board regularly reports on leading and coincident economic indicators. These indicators are signaling continued economic growth with little threat of recession on the immediate horizon, and small businesses are feeling confident about the future. NFIB’s Small Business Optimism Index is at the second highest reading in their 45-year history and a record number of respondents are reporting plans to increase compensation and expand operations. 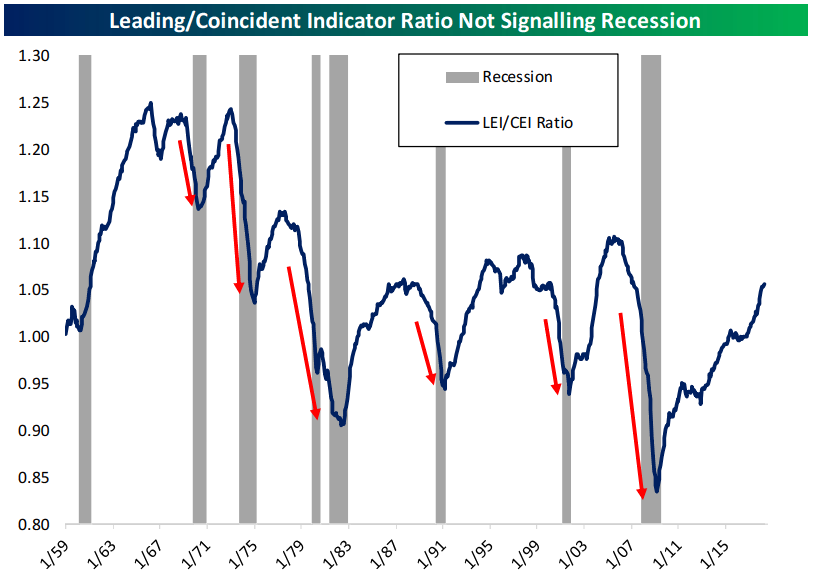 No one knows what the future holds. Markets have always moved forward in fits and starts. As Yogi Berra once said, it’s tough to make predictions, especially about the future. We will remain focused on areas where we have some control and in ways that can add value: long-term strategic thinking, careful cash flow planning, being vigilant about taxes and fees, rebalancing away from assets that have grown expensive in favor of assets that have become relatively cheap, and searching for attractive opportunities in the less efficient and less correlated private markets.