This past weekend Marvel Studios’ highly anticipated “Avengers: Endgame” hit theaters around the world breaking box office records for the largest opening weekend in history at $1.2 billion. Over 30 AMC theaters in the US will be open around the clock to meet the demand, with at least 17 planning to be open non-stop for four days straight.

The rapid pace of online ticket pre-sales forced many vendors to scramble to keep their servers from crashing. By opening night pre-sales totaled an estimated $130 million, breaking another cinematic record. The previous holder, “Star Wars: The Force Awakens” went on to become the third highest grossing movie ever released. Disney owned Marvel Studios, who produced “Avengers Endgame”, aims to do better than that. The movie is projected to become the top grossing film of all time. That should generate some healthy profits even though the cost of making the movie is estimated at between $350-400 million.

Although the past 10 years have proven the ability of Marvel Studios to generate large amounts of revenue, this has not always been the case. Prior to Disney’s 2009 purchase of the studio, Marvel had struggled through bankruptcy. In the 90’s there was a frenzy in the comic book industry which drove collectors to hoard multiple copies of each new issue in the hope that prices would continue to climb. When the mania surrounding comic books subsided, Marvel’s stock price plummeted. In 2005 Marvel was forced to use the movie rights to every franchise it owned as collateral to finance its first production, “Iron Man”.  Many did not see the value in the cash hemorrhaging company at the time, but it was from this moment of greatest doubt that Marvel climbed to become the record breaking franchise it is today.

Marvel’s climb back to the top has echoes in another recent climb: the recovery of the US stock market. In Q4 2018 the uncertainty that arose from trade concerns, the flattening yield curve, and fear of a slowdown in global growth contributed to the worst quarterly S&P 500 performance since 2008.

On Friday the Bureau of Economic Analysis released US GDP figures which show that the economy grew at an annualized rate of 3.2% in the first quarter of 2019, far ahead of preliminary estimates. The S&P 500 finished the quarter up 13.6% which was the best quarterly increase since 2009, and this past Friday both the S&P 500 and Nasdaq indices closed at all-time highs.

While there are major differences between an individual company and indices made up of 100s of names, the recoveries of both Marvel and US stocks began from low points that were the result of periods of fear and doubt. Hopefully each of these recoveries will be remembered the next time that panic hits the market. By remaining calm when it can be most painful, we can “avenge” market downturns by holding on patiently with an eye to the longer term, and the “endgame” projected in our financial objectives. 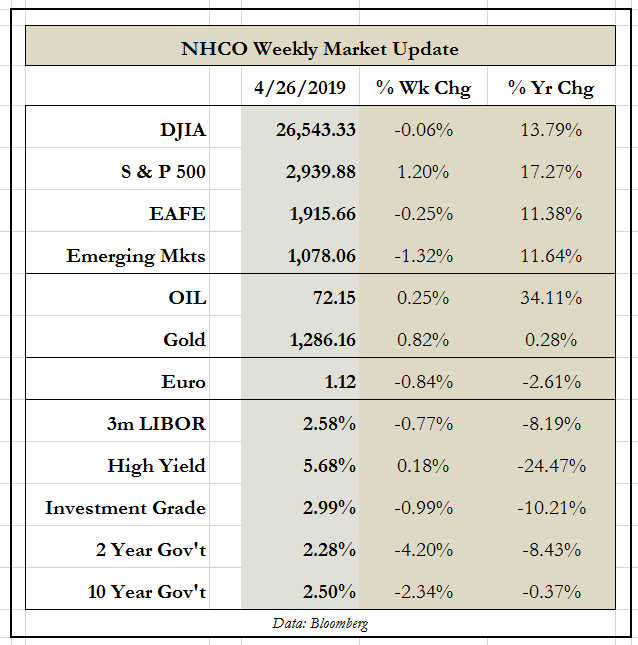